The Lakewood Farm property on north Lakeshore Avenue in Holland, formerly owned by Chicago coal executive George F. Getz, has just been listed on the National Register of Historic Places. This property, also known as Getz Zoo, is only the 12th site in Holland to be listed on the Register, joining such other historic structures as De Zwaan windmill, the Holland Harbor Lighthouse, and the Cappon House.

The 4.23-acre Lakewood Farm property is owned by Ken and Patti Bing who purchased it in 2006.  It is located immediately south of the iconic water tower on Lakeshore Avenue on Holland’s north side. By 2012, they completed a major restoration to restore the main house and landscaping to its appearance when Getz owned the property. “During our renovation effort, we came to understand the role that Getz’s farm and zoo played in the early development of Holland,” noted Patti Bing, “and we began considering the possibility of nominating it to the National Register as a way to honor George Getz.”

The Bings approached Michigan’s State Historic Preservation Office and received validation that the restored property generally met the criteria required for listing. But, they learned that a nomination requires a thesis-like paper making a case for a property’s significance.

In early 2019 the Bings approached local historian and exhibit designer Valerie van Heest of Holland’s Lafferty van Heest and Associates to prepare the nomination. “Valerie shocked us when she said that she had just been retained by the Historic Ottawa Beach Society to develop an exhibit about Lakewood Farm for the Society’s Pump House Museum,” noted Patti Bing.

“I knew that I could accomplish the nomination as well as curate the exhibit through the same research effort,” said Van Heest. Therefore, the Historic Ottawa Beach Society and van Heest decided to nominate the property on behalf of the Bings, supporting the Society’s mission to preserve local history.

Lakewood Farm is not only significant locally, but also nationally. According to Van Heest’s nomination, submitted to the state of Michigan and the National Park Service in September this year, “With the exception of Lakewood Farm, there has never been nor is there today in America a public attraction that is combination working farm, horticultural garden, and zoo set on the shores of a major body and with an on-site owner’s mansion.”

Although the Bing’s property represents less than two percent of the 250- acre farm and zoo that George Getz operated from 1910 to 1938, it represents the whole of Lakewood Farm because it encompasses three of the farm’s largest and most well-crafted buildings and includes both the residential portion of the property as well as the heart of the public gathering space that radiated from a central stone fountain, similar in design to the fountain in Holland’s Centennial Park. This parcel therefore serves as a reminder of the farm that disappeared after the land was divided and sold as 174 different parcels after George Getz’s death in 1938. 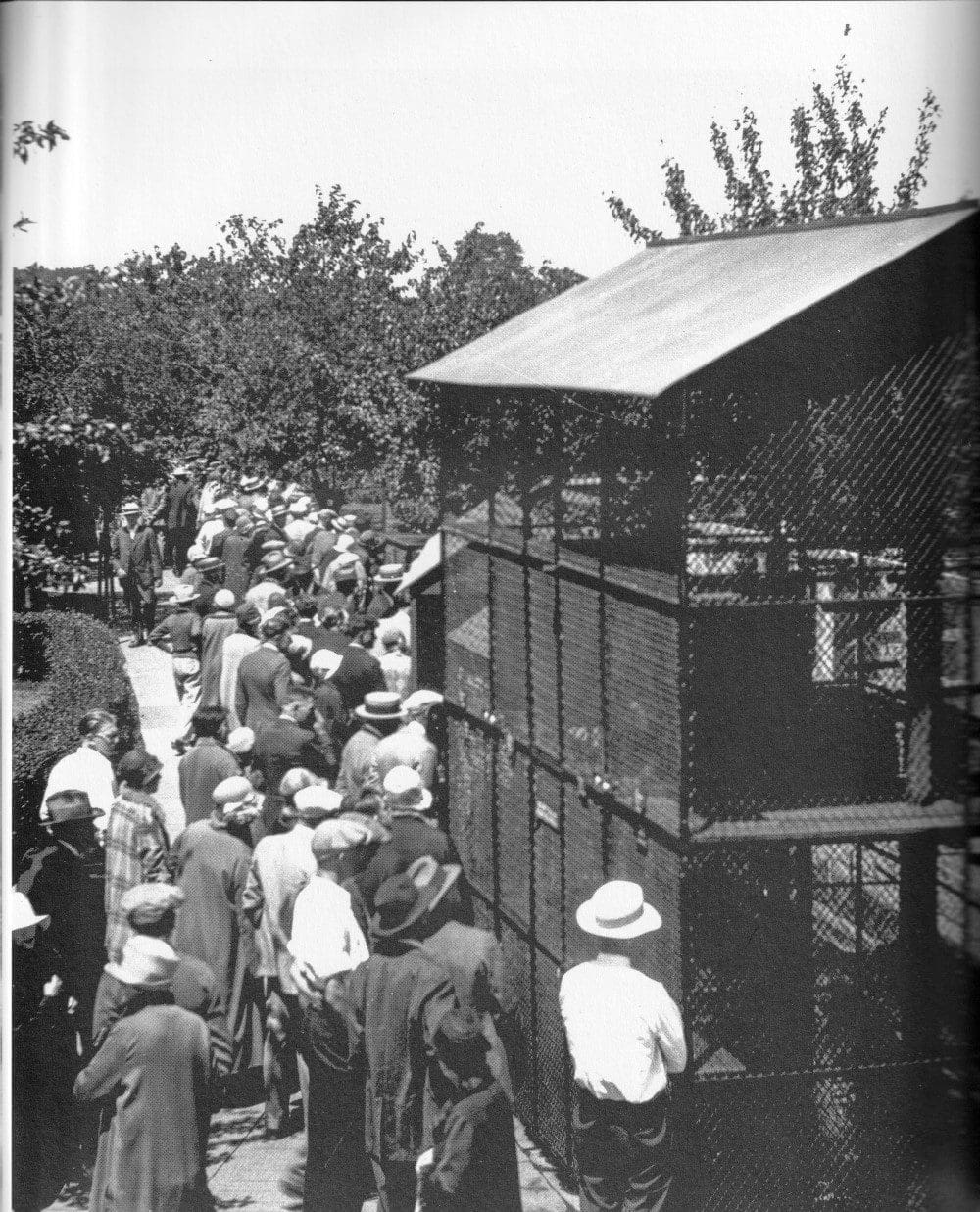 To be listed on the National Register, a property must meet at least one of four specific criteria and Lakewood meets two of the criteria. It is significant in social history through its direct association with George F. Getz, whose work at Lakewood Farm illuminated a number of important political, social, and philosophical movements taking place during the Progressive Era in the early 20th century when government and individuals responded to the rapid industrialization in American. Getz developed Lakewood Farm into one of Michigan’s largest poultry producers. He helped the local county fair became one of Michigan’s most successful fairs. He supported the building of better roads in Holland. He provided the land for what is now Tunnel Park, the first county park in Ottawa County. And he developed a popular zoo that he opened free to the public. By the early 1930s Getz had over 300 animals including “the Big Five,” the most dangerous African animals.  Not even the John Ball Park Zoo or the Detroit Zoo had such a large number and variety of exotic animals at the time. His zoo helped develop Holland as a tourist destination by drawing millions of people to Holland in the mid-1920s and early 1930s.

Lakewood Farm is also significant because the architecture of three main buildings, and associated structures and objects, which were built and/or remodeled by Getz. They are striking examples of modern architecture at the turn of the century as the Stick Style of the late 19th century transitioned to the new Arts and Crafts Movement taking place in the early 20th century.

Van Heest made an unexpected discovery during her research that adds to the property’s significance. It had been widely understood that George Getz bought barren lakefront wasteland in 1910 and built a farm he called Lakewood. In fact, a single woman from Chicago, Ida F. Fay, bought that barren land in 1902, and developed it into a thriving fruit and poultry producer that she named Lakewood.

Patti Bing was thrilled to learn that a woman commissioned the building of her home. Since she and Ken were very involved in the work of remodeling Fay’s home, she feels a kind of kinship with her.  “In 1903 it was very rare for a single woman to build her own mansion, let alone run a farm. Her story can serve to inspire young women today.”

Van Heest noted that it is remarkable that in 1903 Ida Fay’s newly completed mansion was not only the largest Holland area home, but also the only sizeable year-round home on Lake Michigan at the time. But it got little press at the time. Van Heest thinks that the home’s location in the rural northern outskirts of Holland might partly account for that. In addition, the efforts of a woman may have been considered less relevant in that era before a woman could even vote.  “In later years, I think that George Getz became such a notable and beloved local hero because of Lakewood Farm and Zoo,” said Van Heest, “that no one even remembered Ida Fay.”

The wealth of new information that van Heest unearthed about the property, Ida Fay, and George Getz, along with hundreds of never-before-seen photographs provided by Bert A. Getz, George Getz’s grandson, prompted van Heest to write the newly released book “Lakewood Farm & Zoo: George Getz’s Famous Attraction in Holland, Michigan.”  Bert Getz wrote the book’s Foreword and Patti Bing wrote the Afterword, offering an intimate description of her and her husband’s efforts to restore the property, including a number of personal photographs.

Signed copies of the book are available locally through the Historic Ottawa Beach Society at www.HistoricOttawaBeachSociety.org as well as at Readers World in Holland.  In the spring of 2021, the Pump House Museum will reopen featuring the exhibit “Holland’s Earliest Attractions” about Lakewood Farm and Jenison Electric Park, another early 20th century local attraction.

Although Lakewood Farm is now listed on the National Register, the listing remains a private home that is not open to the public. However, the book and exhibit provide a comprehensive view of this iconic local property.

About the Author: admin