Following the American Civil War  (1861 – 1865) the beneficial effects of the industrial revolution , advances in science, medicine, transportation  and technology combined to enable Americans to live longer healthier lives. People had time for leisure, recreation and travel. The railroads were in the midst of a period of unprecedented growth and expansion. Besides connecting small and large cities together and providing a cheap fast way to bring goods to market, the railroads would create destinations and attractions to encourage the leisurely middle class to travel. This is exactly how Ottawa Beach came into being.

Located five miles west of Holland Michigan, Ottawa Beach is bound by Lake Macatawa (Black Lake), Lake Michigan, and Mt. Pisgah. This resort community was platted and development began in 1886. Ottawa Beach is a unique combination of forested dunes, Lake Macatawa shorelines and fine sand beaches. Victorian cottages shelter a vibrant community where residents and visitors can relax with friends or explore the walks, dunes and waterways. This page contains information about the local history beginning with the settlement long before the Dutch arrived, to the development of the community in the 19th century, and its evolution into the 20th century.

Much of the history presented here comes from the book Ottawa Beach and Waukazoo: A History by Donald van Reken 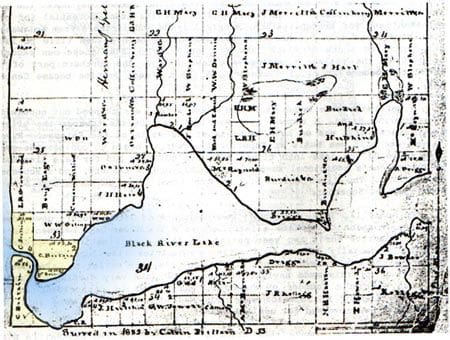 The properties highlighted in yellow on the map at the left were the lands owned by surveyor Brittan that became Ottawa Beach. Note the narrow curved channel connecting Lake Macatawa with Lake Michigan. 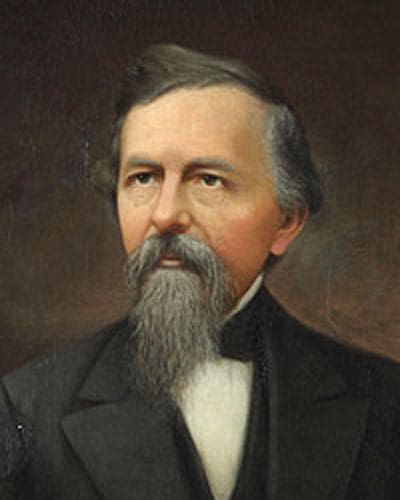 The early Dutch settlers of Holland and their leaders could see the value of developing Lake Macatawa into a navigable harbour. In 1849, they paid for a survey of the channel, the map of which shows two possible locations for a new straight channel between â€œBlack Lake or Ma-Ca-Ta-Waâ€ and Lake Michigan. The reverend Mr. Albertus. C. Van Raalte successfully petitioned the federal government on several occasions for the appropriation of funds for the creation and maintenance of the channel between Lake Macatawa and Lake Michigan. The original channel was judged unsuitable for navigation and a new straighter channel was dug from Lake Macatawa into Lake Michigan. 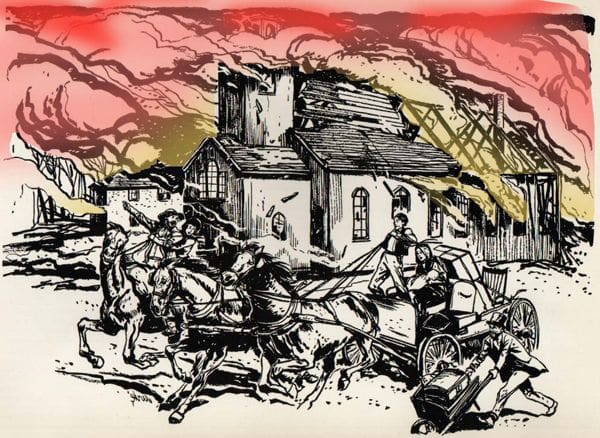 On a hot, dry and windy autumn day in October 1871, three other major fires occurred along the shores of Lake Michigan at the same time as the Great Chicago Fire. Some 250 miles to the north, the Peshtigo Fire consumed the town of Peshtigo, Wisconsin, along with a dozen other villages. It killed 1,200 to 2,500 people and charred approximately 1.5 million acres ranking as the deadliest fire in American history but the remoteness of the region meant it was little noticed at the time. That same day the lumbering community of Manistee, Michigan also caught fire in what became known as The Great Michigan Fire. Holland, Michigan, also went up in flames that day, destroying about two thirds of the City. Near the same time, articles in the city’s English language newspaper began to report about local interest in developing resort and recreational facilities out at the lakeshore. A group of Holland businessmen were planning to construct a road along the south shore of Lake Macatawa out to the dunes and beaches of Lake Michigan and to construct a hotel, cottages and other resort facilities. 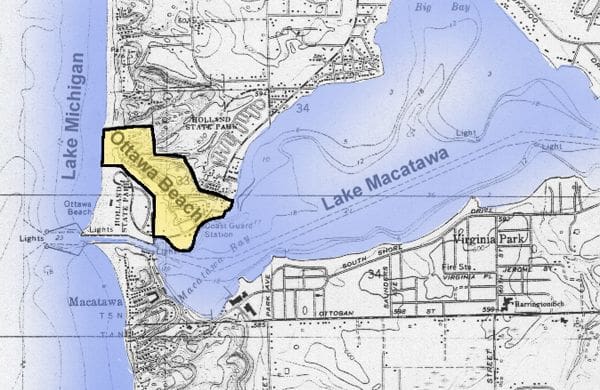 In 1886, 54 acres on the north side of the channel were surveyed and platted by a development group organized as the West Michigan Park Association. Then later another 20 acres was added. The officers of this organization (which exists to this day) was comprised almost entirely of Grand Rapids residents and included a number of prominent citizens. Included among them were Chicago and West Michigan Railway. superintendent JKV Agnew, railway General Manager JB Mulliken, railway  General Passenger Agent WA Gavett and Col. Chas Nix, who owned resort hotels in Lake Geneva, WI and St. Joseph, Michigan. This newly formed association planned to build a resort hotel at Ottawa Beach and extend the Chicago and West Michigan Railway line out it from Holland. Individual lots roughly 50′ x 100′ were laid out for summer cottages in this plat, some facing Lake Michigan, others facing Lake Macatawa.

READ ABOUT THE HOTEL OTTAWA